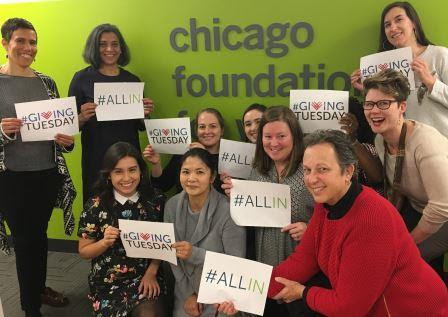 At this time of year, many of us are gathering with co-workers, friends, family and loved ones to celebrate the holidays.

It is a time that invites reflection on the importance of community as a source of support, inspiration and power. As Dolores Huerta said at CFW’s 32nd Annual Luncheon, “it’s not about one wonder woman,” but rather, “it all comes down to people power.” Collectively, we can have a greater impact than we ever could as individuals.

This was especially clear on #GivingTuesday, when over 200 donors came together to help CFW raise $19,918, in a remarkably short period of time, in order to secure a matching donation of $20,000 and make three #GivingTuesday grants to support immigrant and refugee women and girls.

#GivingTuesday, following Thanksgiving and kicking off the season of giving, reminds us of everything we have to be grateful for. For all of us at CFW, it is a reminder of what an amazing community of donors, supporters and champions we have, who show up for women and girls all year round and inspire us to push for results and to grow our impact.

This holiday season, I am grateful to count you among the people who power our work. Thank you.

GIVE THE GIFT OF HEALTH, SAFETY & JUSTICE

This holiday season, give the gift of health, safety and economic security for Chicago-area women and girls by supporting CFW’s grantmaking and programming. Every dollar helps, and there are lots of ways to give! You canmake an end-of-year gift to support additional grants in 2017; become a sustainer with a monthly gift; or make grants in your community as a member of a Giving Council or Circle.

CFW announced $30,000 in #GivingTuesday grants to support services for immigrant and refugee women and girls in the Chicago region. An outpouring of support allowsed CFW to double its #GivingTuesday grants this year. Based on a community vote leading up to and on #GivingTuesday, CFW will award $20,000 toChinese Mutual Aid Association to support the Young Women Warriors Project, a free, year-round mentorship program that connects young women from immigrant families with mentors and workshops on issues including applying for college, financial literacy, social services and health. CFW will also make two grants of $5,000 each to Syrian Community Network and Western Suburban Action Project (PASO).

Start the Season with CFW

Please join Chicago Foundation for Women and friends in Wilmette tomorrow, Thursday, December 7, to start the holiday season with an evening benefiting women and girls. Guests will hear from two CFW grantees working to increase women’s economic security. Guests will also have the opportunity to win two Southwest airline tickets, thanks to Southwest, the official airline of CFW. Register online today!

Make sure women have a voice in the Illinois governor race

This Saturday, December 9, Chicago Women Take Action (CWTA), CFW and over forty partners will host the Women’s Gubernatorial Forum at the Chicago Temple. Heidi Stevens of the Chicago Tribune spoke with CWTA co-founder Marilyn Katz about why women’s voices are a necessary part of the upcoming election. “Women are in the leadership of virtually every battle on every issue you can think of,” says Katz. Admission is free, but registration is required. The forum will also be broadcast live on Cable Channel 27 CANTV and Cantv.org, as well as through Indivisible Illinois.

Despite dreary weather, the first annual Pink Hat Run, Walk and Roll raised more than $7,000 for local organizations supporting women and girls. Thanks to everyone who came out and supported CFW at the event!

Nadiah Mohajir, Executive Director and co-founder of HEART Women & Girls,was named one of  twenty-one leaders to participate in the fourth cohort cycle of the NoVo Foundation’s Move to End Violence, which supports leaders in the movement to end violence against women and girls. You can learn more about Nadiah’s work to end sexual violence in Muslim communities in CFW’s 32nd Annual Luncheon video. Congratulations Nadiah!

Photo courtesy of the Chicago Chapter of the US National Committee for UN Women.

Apna Ghar Executive Director Neha Gill, Healing to Action co-founder and co-director Sheerine Alemzadeh, and A Long Walk Home co-founders Scheherazade and Salamishah Tillet were all honored with the Gender Equality Award by the Chicago Chapter of the US National Committee for UN Women.

As women continue to bravely come forward to share #MeToo stories of sexual harassment and abuse, RedEye looks for a way “turn this dialogue into action,”and focuses  on CFW grantee Rape Victim Advocates, where you can volunteer to support survivors as a medical advocate, or support Sexual Assault Awareness Month in April.

Breast Cancer Mortality for Black Women on the Decline

In Chicago, more black women die of breast cancer than white women. But thanks to improved access to quality breast health services and resources through organizations like the Metropolitan Chicago Breast Cancer Task Force, a CFW grantee through the Catalyst Fund for Reproductive Justice, fewer black women are dying of breast cancer. The Chicago Tribune reports that “Chicago now leads the nation in reducing the disparity in deaths among black women.” MCBCTF continues to raise awareness during and beyond Breast Cancer Awareness month in October, offering free mammograms and workshops.Chicago Foundation for Women has been proud to support MCBCTF for over seven years.

As national conversation around women’s experiences of sexual harassment and workplace sexual violence continues, Unite Here Local 1 celebrated the passageof a new city ordinance designed to protect workers in Chicago’s hotel industry. The “Hands Off Pants On” ordinance requires hotels to equip employees with panic buttons if they work alone in guest rooms or bathrooms, starting July 1, 2018. 58 percent of surveyed female hotels workers said they had been harassed by hotel guests and 49 percent of house keepers said they had guests flash them or answer the door naked.