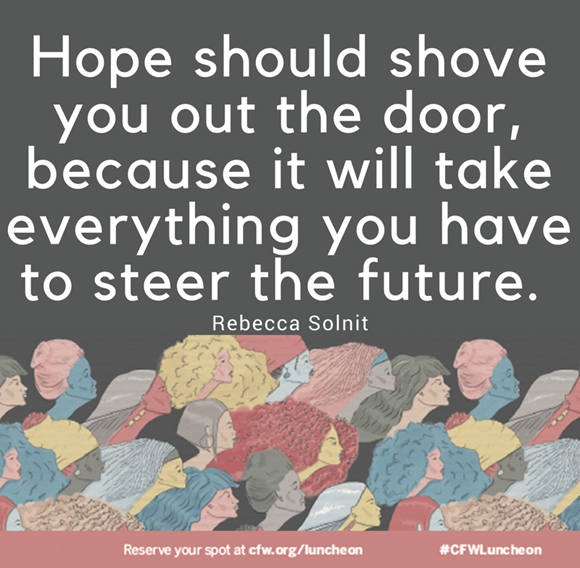 Hope should shove you out the door, because it will take everything you have to steer the future.
The road to progress is rarely straight and narrow. There are hurdles and obstacles that slow us down. The road twists and turns, through peaks and valleys. And sometimes, it doubles back.

When every week brings new setbacks, from new travel bans and threats against DACA and the Dreamers, to the reversal of Title IX protections for victims of sexual assault, it can feel like we are moving backwards; retreading the same ground, fighting the same battles over and over again.

The journey is a marathon, not a sprint. We are in it for the long haul. It’s okay to pause, to catch our breath and take stock of the progress we have made:

These victories matter to women. They are proof that we are making progress, and can continue to do so.

The 32nd Annual Luncheon on October 19 is an opportunity for us to come together to celebrate our wins, to re-energize and re-fuel, and to strategize our next move forward.

Our speakers Dolores Huerta and Alicia Garza know about strategizing for the long fight. Dolores has been an activist for most of her 87 years, and has been a witness to the ebbs and flows of progress. Alicia has created a movement that changed the way we talk about racial justice and equity. At 36 years old, she is learning to pace herself, to preserve and to focus her energy so that she does not burn out, while continuing to push forward: “I am driven by wanting to see change in my lifetime,” she says.

These two women in conversation will remind us how far we have come since Dolores first began her career as an organizer in 1955, and how far we still have to go. There are no shortcuts or quick fixes. But there is inspiration in our history and in our present. And this should give us hope.

We will need hope as we push forward. As Rebecca Solnit writes, despair is easy. Despair is safer and “demands less of us.” Hope, on the other hand, “calls for action.” Hope, she writes, “should shove you out the door, because it will take everything you have to steer the future.”

On October 19, we will resist despair and stagnation. We will celebrate our accomplishments as steps forward. We will replenish our energy and prepare for the next leg of our journey. And we will be firm in our hope. Solnit reminds us: “Action is impossible without hope.”

I hope you’ll join us. Register for the Annual Luncheon today.

K. Sujata
President/CEO
Chicago Foundation for Women
P.S. Can’t attend the luncheon October 19? You can still be part of the action by making a gift to support CFW programs today.

A CALL TO ACTION 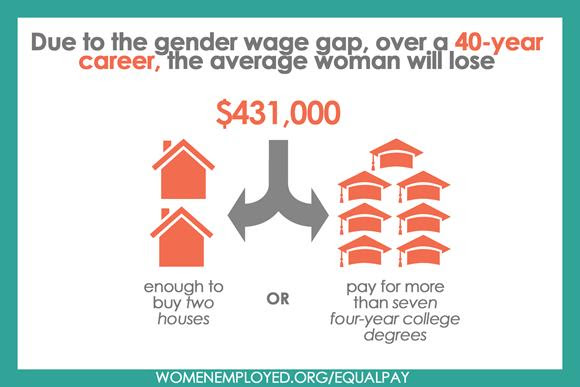 This summer, Governor Rauner vetoed a bill to close the wage gap in Illinois. Earlier this year, women’s advocacy groups across the state, including CFW grantees Women Employed and Shriver Center, came together to champion a bill to strengthen the existing Illinois Equal Pay Act—which prohibits employers from paying women less than men for doing the same work—by barring employers from asking job applicants about their previous salaries. Equal pay for equal work is a matter of basic fairness, and wages should be determined by the job’s responsibilities and the applicant’s qualifications—not based on their previous earnings. The No Salary History bill (HB 2462) passed the House and Senate with bipartisan support, but Governor Bruce Rauner vetoed it. Now, equal pay advocates are working to secure a veto override in the upcoming fall legislative session. Learn more and take action today! 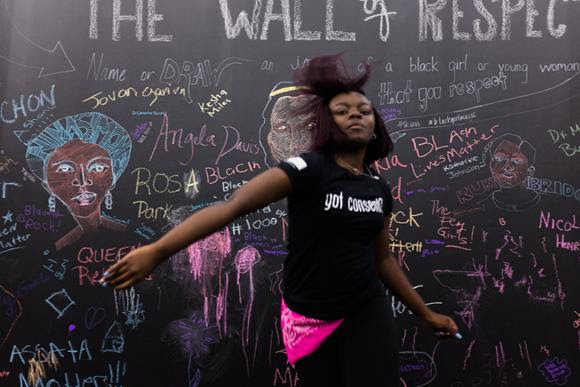 CFW President/CEO K. Sujata took a deeper look at the report’s findings, and what they mean for women in Chicago, in a recent article for Make It Better magazine. 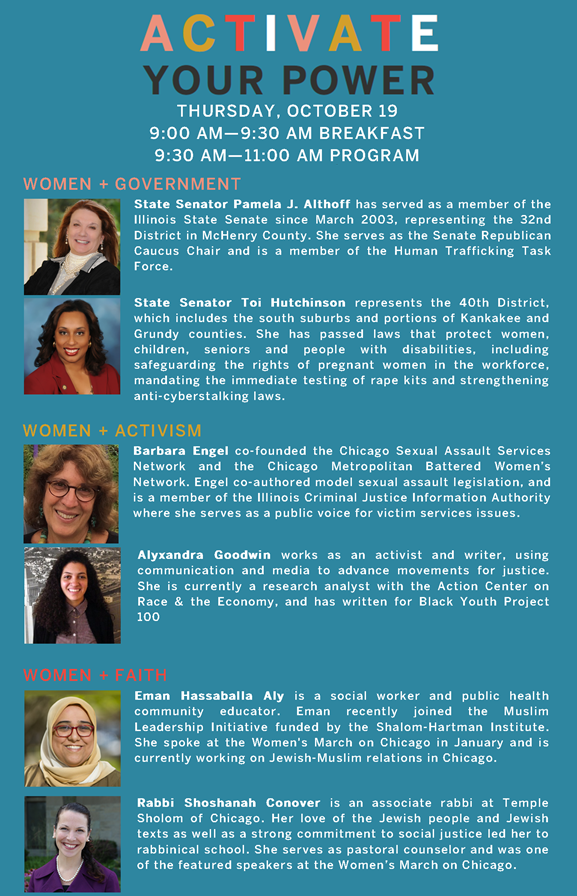 Before hearing from national organizers and activists Dolores Huerta and Alicia Garza at the 32nd Annual Luncheon on October 19, join CFW at the Morning Symposium for a series of conversations with six women making change in our communities.

The morning symposium will feature state senators working across party lines; community activists fighting to end violence; and women of different faiths who share a commitment to social justice. You’ll also have the opportunity to connect with members of the CFW community.

The symposium is free and open to the public, but space is limited. Register today and reserve your seat. 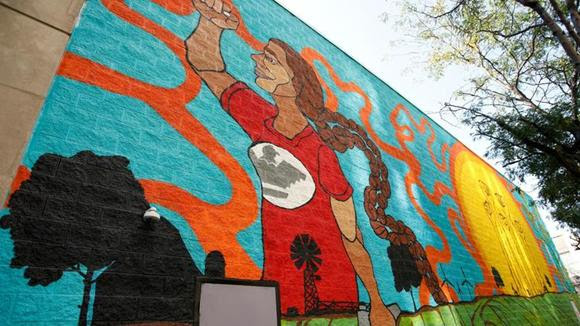 With a new documentary, Dolores Huerta is finally getting her due for her role in American history, as a labor organizer, civil rights activist and co-founder of the United Farm Workers union. CFW Vice President of Development and Communications Emily Dreke spoke to the Chicago Tribune about Huerta’s legacy: “She really hasn’t gotten enough recognition for all the great contributions she’s made to labor rights and equity and more recently, with getting Latinas to run for office and be involved in politics.”

With a new documentary and an art exhibition at Columbia College, there are lots of opportunities to brush up on Huerta’s history before you hear her in conversation with Alicia Garza at CFW’s 32nd Annual Luncheon. 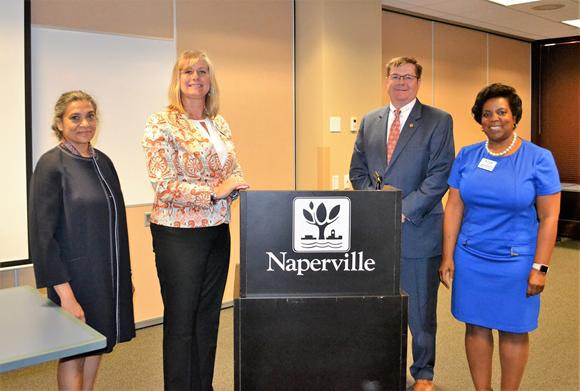 K. Sujata joined a panel of civic leaders hosted by the League of Women Voters Naperville to discuss the impact of the Illinois budget on women and their families. Sujata shared CFW’s research, in collaboration with Voices for Illinois Children and Loyola University Center on Urban Research and Learning on the impact of the budget impasse on women and children. You can read the full report here.

Beyond the Bridge Now Online 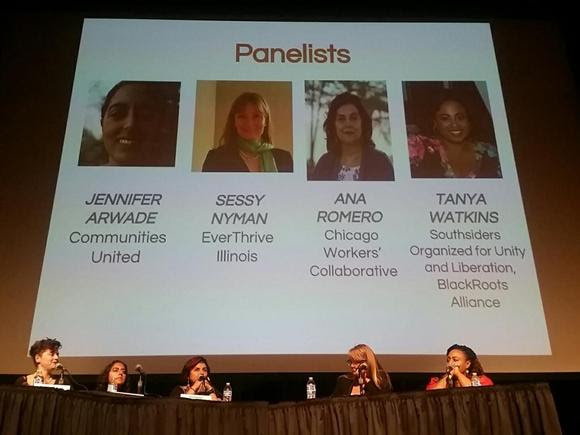 Did you miss CFW’s August event at Harold Washington Library, Beyond the Bridge: From Creating Coalitions to Creating Change? The panel, featuring Sessy Nyman of EverThrive Illinois, Ana Romero of Chicago Workers Collaborative, Tanya Watkins of Southsiders Organized for Unity and Liberation and Jenny Arwade of Communities United, is now available to watch online. Panelists discussed the critical role trust and relationships play in coalition building and the need to invest in the leadership of women of color. Interested in serving on a nonprofit board, but not sure where to start? Board Boot Camp is a comprehensive, interactive, two-and-a-half day training in topics such as board roles and responsibilities, nonprofit financials, and fundraising basics. Board Boot Camp participants will learn about board service through a gender and racial equity lens and have the opportunity to connect with local organizations. Early bird registration closes tomorrow!

Governor Rauner signed two important pieces of legislation in September. House Bill 40 protects women’s reproductive choice in Illinois by removing “trigger” language that would have criminalized abortion in the event that Roe v. Wade was overturned, and ends the discriminatory policy of restricting abortion coverage for women with public insurance. You can read Sujata’s Op-Ed on why reproductive choice is an economic issue, and CFW’s statement on HB40 here.

CFW grantee Chicago Appleseed Fund for Justice was part of a movement of lawyers, judges, parents and advocates calling for the end of a two-tiered courts system in which child support and paternity cases for unwed parents were heard in a separate courtroom. Says Judge Grace Dickler, who was an advocate for the move, “We wanted to make sure there was no perception of a stigma to children of unmarried parents.”

Just six percent of Fortune 500 companies have a woman in the Chief Executive role. After the departures of Irene Rosenfeld from Mondelez and Ilene Gordon from Ingredion, that number will be lower. The Chicago Tribune and Crain’s Chicago Business both addressed the need for companies to get serious about gender parity in the c-suite. But the lack of women in corporate management, as discussed in CFW’s report on gender parity, suggests that the problem of women’s equal representation isn’t going anywhere soon. 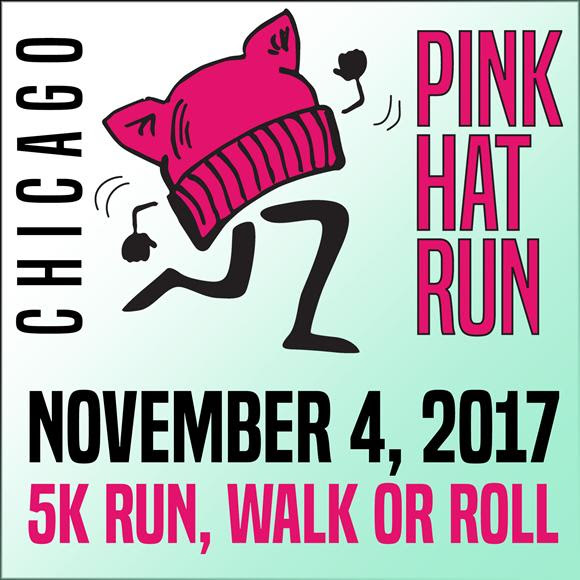 The first annual Pink Hat Run will take place in Chicago Saturday, Nov. 4, 2017. The 5k/1mi run, walk or roll will benefit local organizations that provide services, advocacy and support to women and girls, including Chicago Foundation for Women. You can register to run for CFW at http://www.pinkhatrun.com/

A Night with the Chicago Bulls 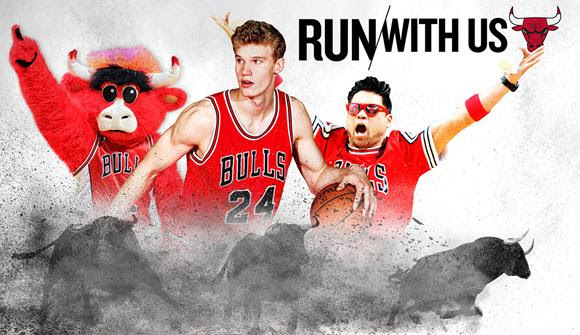 Join CFW for a game of basketball benefitting women and girls in the Chicago region. The Chicago Bulls match up against the Charlotte Hornets on Friday, November 17, and CFW friends and family can purchase tickets at a discount, with a portion of each ticket benefitting CFW. Purchase your ticket with promo code CFW here.